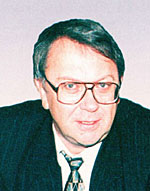 
Vladimir E. Fortov was born in Moscow, Russia on 23 January 1946. In 1962 he entered Moscow Institute of Physics and Technology  the most prestigious Russian Education Center in Physics. Following his graduation in 1968 he accepted a post-graduate position in the same Institute. After completing his PhD in Strongly Coupled Plasma Physics in 1971, he was invited by Nobel Laureate acad. N. Semenov to the Institute of Chemical Physics of Russian Academy of Sciences to join Prof. Lev Altshuler and acad. Yakov Zeldovich teams working in the field of intense shock and detonation waves and high dynamic pressure. He was awarded his Doctor degree Physics of Strongly Coupled Plasma Generated by Intense Shock Waves by Russian Academy of Sciences in 1976. In 1978 he received professors degree in Physics and Chemistry in the Russian Academy of Sciences. He was appointed in 1976 a head of High Dynamic Pressure and Detonation lab, then the division director, in the Institute of Chemical Physics. The same year he accepted the directorship of Extreme Matter Department in the Institute for High Temperature RAS, which in 1992 was transformed to the Presidium of RAS. From 1991 he is a professor and Chair Director of High Energy Physics Chair in Moscow Institute of Science and Technology.

Prof. V. Fortov performed the pioneering experimental investigations on physical properties of hot dense matter at megabar pressure range, which are very important for astro- and planetary physics, energetics, engineering, and other high temperature applications. He is one of the firsts who applied the intense shock waves for investigations of physical properties of plasmas under extreme pressure and temperature. Prof. V. Fortov carried out the new and detailed measurements of physical properties (equation of state, conductivity, opacity, stopping power, light reflectivity, plasma composition, et-cetera) of strongly coupled plasmas with strong interparticle interactions. He has made the key contributions to understanding and expands knowledge of basic properties of matter under extreme conditions.

Along with the Russian Prizes and medals Vladimir E. Fortov was awarded L.P. Karpinsky Prize in Physics and Chemistry, 1997, P. Bridgeman Prize for Achievements in High Pressure Physics and Technology, 1999, Max-Plank Award for Physics, 2002, Alfven Prize of European Physical Society, 2003. He is a Member of Rassian Academy of Sciences (1991-), the Head of Power Engineering Division of RAS, Member of European Academy of Sciences (1998-), International Academy of Astronautics (2000-), Max Plank Society (2000-), Fellow of American Physical Society (2001-), Foreign Member of the National Academy of Engineering, USA (2002-), Foreign Fellow of the Royal Engineering Academy, England (2003-), and of the Royal Academy of Engineering Sciences, Sweden (2004).