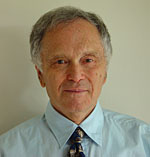 
"For fundamental and original contributions to statistical physics, including development of the scaling theory for correlation functions near critical points and of theories for commensurate-incommensurate phase transitions."


Master Degree from Kharkov University, Ukraine in 1953. My teachers there were I.M. Lifshitz, G.Ya. Lyubarski, A.I. Akhiezer. After graduation I have spent 13 years in Novosibirsk, first as a teacher of Mathematics at a technical High School, later as a PhD student under supervision of Yu. B. Rumer. In 1957 I have defended my PhD thesis on Linear Arrays theory at Tomsk University. From 1957 till 1966 I was a scientist, then the head of a group at Institute of Radiophysics, later Institute of Semiconductor Physics of Siberian Branch of Academy of Sciences. Simultaneously I taught Theoretical Physics at Novosibirsk University. In 1966 I was invited to newly organized Landau Institute for Theoretical Physics at Chernogolovka, Moscow District, whose member I continue to be now. I also was employed as a professor at Moscow Institute of Physics and Technology. In 1992 I became a professor of Physics at Texas A&M University.
My works relate to Quantum Mechanics, Statistical Physics and Condensed Matter theory. In Quantum Mechanics I have proposed a method allowing calculation of values beyond all power approximations in Planck constant, such as the overbarrier reflection amplitude. In Statistical Physics I worked in theory of Phase transitions. These works are awarded now. My recent interests are focused onto two problems. One of them is the influence of external noise on the Landau-Zener tunneling. Another problem is the properties of Ferromagnet-Superconductor hybrids.
Awards: Landau Prize of Soviet Academy of Science 1984 for the works in Phase Transition theory, together with A.Z. Patashiniski; Humboldt Prize 2000 for contributions in Physics; Distinguished Professor 1998; Member of American Physical Society 1996.