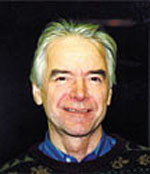 
"For fundamental contributions to the understanding of non-perturbative QCD, non-leptonic weak decays, and the analytic properties of supersymmetric gauge theories."


Dr. Zakharov graduated from the Moscow Institute of Physical Engineering in 1963 and received his Ph.D. in 1966 from the Institute of theoretical and Experimental Physics (ITEP) in Moscow.