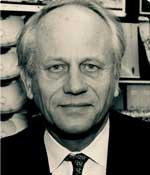 
Tony Maxworthy is Smith International Professor of Mechanical Engineering and Professor of Aerospace Engineering at the University of Southern California. He received his B.Sc (with 1st Class Honours) from Imperial College, London in 1954, an M.S. degree in 1955 from Princeton University and a PhD in 1960 from Harvard University, all in Mechanical Engineering. His primary research interests are in the areas of environmental and geophysical fluid mechanics, aerodynamics, turbulence, solidification, convection and bio-fluid mechanics. He is well known for his conception, design and implementation of key laboratory experiments that capture the essence of important fluid phenomena. He is a member of the National Academy of Engineering, and a Fellow of the American Physical Society and the American Academy of Arts and Sciences. He has received the G. I. Taylor Award of the Society of Engineering Science, a von Humboldt Senior Scientist Award and the Otto Laporte Award of the American Physical Society among several. He has been a Visiting Professor and Fellowship holder at a number of universities and research centres across the world as well as a consultant to several industrial concerns.