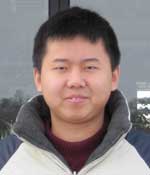 
Tingjun Yang was born in China in 1979. He received his B.S. degree in Physics from the University of Science and Technology of China in 2002, where he worked with Prof. Hongfang Chen on his undergraduate senior thesis on a study of the MRPC detector for the RHIC-STAR experiment.  He also worked on theoretical calculations of laser-solid interactions with Prof. Ji Chen.

Tingjun Yang performed his doctoral research at Stanford University under the supervision of Prof. Stanley Wojcicki, receiving his Ph.D. in Physics in 2009. His thesis work was completed on the MINOS experiment at Fermilab, which is a long baseline neutrino oscillation experiment. This work tried to identify subdominant oscillation mode, numu to nue transition, which is related to the yet unmeasured mixing angle theta13. A non-zero theta13 will make it possible to understand the CP violation in the neutrino sector and to determine the neutrino mass hierarchy. In collaboration with his MINOS colleagues, he developed a particle identification algorithm, a background decomposition method, and evaluated many major systematic effects, all of which are crucial to the success of this analysis. This analysis showed a small excess of data with respect to the prediction, which hinted a non-zero theta13.  The methods he developed can be applied to the future analysis with more data, which will help to understand this important parameter better.

Dr. Yang is now a postdoctoral research associate at Fermilab where he works on the CDF experiment, which studies p-pbar collisions at the Tevatron, and the R&D of liquid argon detector for the future neutrino experiments.