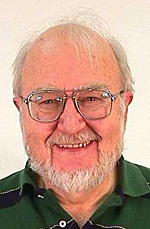 
"For his outstanding contributions to the field of spectroscopy in strongly corrrelated electron systems leading to elucidation of many-body physics."


Tom Timusk did his undergraduate work at the University of Toronto in 1957 and his Ph.D. at Cornell in 1961. After postdoctoral work in Frankfurt, Germany and at the University of Illinois, he joined the physics department at McMaster in 1965. He has spent research leaves at Cornell, Berkeley, University of Florida, Toronto and AT&T Bell Laboratories. He has held a Sloan Fellowship and is a Fellow of the American Physical Society and the Royal Society of Canada. He is an associate of the Canadian Institute of Research program in superconductivity. In 2000 he received the Canadian Association Medal of Achievement in Physics and the Brockhouse Medal for Condensed Matter and Materials Physics.

Using infrared radiation he has worked on the spectra of defects in alkali halides, on quasi-crystals, the exciton gas and electron-hole fluid in semiconductors, the cosmic microwave background radiation and the propagation of radiation in insulating materials, such as fiber glass and goose down.

His current work is in the area of exotic superconductors such as the organics, the heavy Fermions, and the cuprates where, most recently, he has been interested in the interplay between the pseudogap and the quantum critical behaviour as the level of oxygen doping changes.