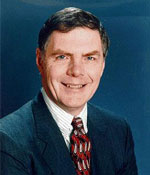 
"For his pioneering spectroscopic investigations of complex molecules, free radicals, and ions  especially for the development of a quantitative understanding of the Jahn-Teller effect in organic molecules."


Terry A. Miller holds an Ohio Eminent Scholar Chair at The Ohio State University. He is also Director of the Spectroscopy Institute and Chair of the Chemical Physics Program there. Previously he was a Distinguished Member of Technical Staff at Bell Laboratories. He has held visiting faculty appointments at Princeton University, Stanford University, and the Institute for Molecular Science in Japan. He received his undergraduate degree in 1965 from the University of Kansas and his Ph.D. from Cambridge University in 1968, where he was a Marshall Scholar. Dr. Miller's research centers around the spectroscopic identification, characterization and monitoring of reactive chemical intermediates. He has developed numerous spectroscopic techniques spanning frequencies from the microwave to the ultraviolet. Presently, his laboratory focuses upon reactive intermediates, particularly alkoxy and peroxy radicals, involved in the oxidation of hydrocarbons. He is author of more than 325 scientific publications. His research has been recognized with the Meggars Award (OSA), the Bomem-Michaelson Award (Coblentz Society), the Bourke Medal (Royal Society of Chemistry), and the Broida Prize (APS). He has been granted the recognition of Fellow by the APS, OSA and AAAS. He served on the Council of the American Chemical Society and as a member of the Executive Committee of its Physical Chemistry Division. He is Editor of the Journal of Molecular Spectroscopy and Chair of the OSU International Symposium on Molecular Spectroscopy which annually attracts approximately 500 conferees.