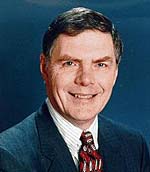 
"For his far-ranging contributions to spectroscopy and chemical physics of diatomics and radicals, his development of methods for plasma diagnostics, and for his stewardship of the Ohio State Spectroscopy Conference."

Dr. Miller is actively involved in research, teaching and administrative duties at Ohio State. His research centers around the spectroscopic identification, characterization and monitoring of reactive chemical intermediates. He has developed a number of experimental spectroscopic techniques spanning frequencies from the microwave to the ultraviolet. Systems studied have ranged from simple atoms to aromatic radicals and ions. At present, his laboratory is applying a battery of spectroscopic techniques including LIF, REMPI, ZEKE, CRD, and fluorescence depletion spectroscopy to the characterization of the structure and dynamics of a number of interesting chemical intermediates, including the alkoxy radicals, organometalic reactive intermediates, and aromatic organic radicals. He has authored many scientific publications including journal articles and books.

Dr. Miller has been or is currently serving as editor or on the editorial board of a number of scientific journals. He has served on the Council of the American Chemical Society and chaired a number of international scientific meetings. At The Ohio State University, he is Director of the Spectroscopy Institute and Chair of the Chemical Physics Program. He is a Fellow of the American Physical Society and the Optical Society of America. He has been recognized by receiving the Meggars Award from the Optical Society of America (1993), the Bomem-Michaelson Award of the Coblentz Society (1995), and the Bourke Medal of the Royal Society of Chemistry (1998).