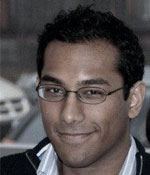 
Sujit S. Datta received B.A. (with honors) and M.S. degrees in Physics, and a B.A. in Mathematics, from the University of Pennsylvania in May 2008. As an undergraduate at Penn, Datta studied the physics of electrons at the nanoscale in Prof. A. T. Charlie Johnson's group. He used experimental and computational tools to study the biochemical, structural and electronic properties of one- and two-dimensional nanostructures including few-layer graphene, carbon nanotubes, and devices for single-molecule electronics. This has included using advanced microscopy techniques to better understand Thomas-Fermi screening of relativistic charge carriers in few-layer graphene, as well as various interesting electrical properties of other molecular nanomaterials; demonstrating a straightforward method by which nanoscale structures with crystallographic edges can be 'carved out' in few-layer graphene; using computational tools to explore the effects of parameters relevant to nanogap devices for single-molecule electronics; and collaborating with physicists, chemists and biologists to develop nanoscale transistors that act as sensitive real-time detectors of viral proteins. Datta has been recognized for his work and academic achievements through a number of awards. These include the Roy and Diana Vagelos Science Challenge Scholarship, Class of 1971 Robert J. Holtz Endowed Fund for Undergraduate Research Award, University of Pennsylvania Deans Scholar, Vagelos Undergraduate Research Award, Communicating Within the Curriculum Emerging Scholar, and William E. Stephens Prize in Physics and Astronomy. He is a member of the Phi Beta Kappa and Sigma Xi honor societies. Datta is currently pursuing a Ph.D. in Physics at Harvard University. His current research interests include experimental soft condensed matter physics and physical biology.