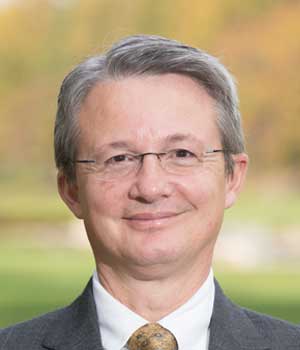 
"For seminal contributions to two US administrations' efforts to minimize the threat of nuclear war, for helping to establish nuclear archeology as a viable and effective method for supporting arms control and countering proliferation, and for contributing expert analysis leading to the UN General Assembly's adoption of the 1996 Comprehensive Nuclear Test-Ban Treaty."


Steve Fetter is associate provost and dean of the Graduate School at the University of Maryland. He has been a professor in the School of Public Policy since 1988, serving as dean of the School from 2005 to 2009. He is a member of the National Academy of Sciences Committee on International Security and Arms Control and has served on committees to assess the U.S. nuclear weapon policy, monitoring of nuclear weapons and nuclear materials, the effects of nuclear earth-penetrating warheads, internationalization of the nuclear fuel cycle, conventional prompt global strike, geoengineering, ballistic missile defense, and nuclear forensics. Fetter has served in government several times, most recently in the White House Office of Science and Technology Policy for five years during the Obama Administration, where was assistant director at-large and directed the environment and energy division and the national security and international affairs division. He has been a visiting fellow at Stanford, Harvard, MIT, and Lawrence Livermore National Laboratory, a consultant to many federal agencies, and a member of the director of National Intelligence's Intelligence Science Board and the Department of Energy's Nuclear Energy Advisory Committee. He is a fellow of the American Physical Society and a recipient of the APS Joseph A. Burton Forum Award, the Federation of American Scientists' Hans Bethe & Science in the Public Service award, and the Secretary of Defense Medal for Outstanding Public Service. Fetter received a PhD in energy and resources from UC Berkeley in 1985 and a SB in physics from MIT in 1981.