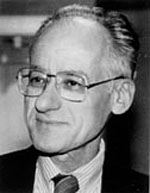 
"For the invention and development of the vibrating sample magnetometer and many of its successful applications, and for the innovative development of very high field pulsed magnets."