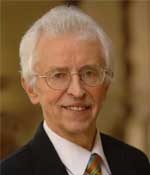 
"For his leadership in developing international science and technology cooperation in areas critical to global security resulting in real reductions in the dangers of nuclear proliferation and nuclear terrorism."


Siegfried S. Hecker is co-director of the Stanford University Center for International Security and Cooperation, Senior Fellow of the Freeman Spogli Institute for International Studies, and Professor (Research) in the Department of Management Science and Engineering. He is also director emeritus at the Los Alamos National Laboratory, where he served as director from 1986-1997 and senior fellow until July 2005. He received his B.S., M.S., and PhD degrees in metallurgy from Case Western Reserve University.  His current professional interests include plutonium research, cooperative nuclear threat reduction with the Russian nuclear complex, and global nonproliferation and counter terrorism. He is a member of the National Academy of Engineering and served as a Councilor and serves on the National Academy of Sciences Committee on International Security and Cooperation Nonproliferation Panel. He is a foreign member of the Russian Academy of Sciences. He is also a member of the Council on Foreign Relations, fellow of the American Physical Society, the American Academy of Arts and Sciences, the American Association for the Advancement of Science, The Metallurgical Society, ASM International, and an Honorary Member of the American Ceramics Society. Among other awards he received the Presidential Enrico Fermi Award, the Los Alamos National Laboratory Medal, the Department of Energy’s E.O. Lawrence Award, the American Nuclear Society Seaborg Award and the Eugene L. Grant Award for Excellence in Teaching