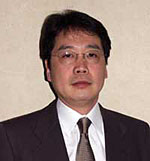 
"For developing the Fast Ignition inertial fusion concept and for demonstrating key aspects of it in a series of experiments that have catalyzed the world-wide effort on the concept."


Ryosuke Kodama is a Professor of Graduate School of Engineering, Osaka University. He also is a Professor of Institute of Laser Engineering, Osaka University. He studied electrical engineering and science at Osaka University, earning his B.S. degree in 1985, his M.S. degree in 1987, and his Ph.D. degree in 1990. He was a visiting researcher at Clarendon Laboratory, Oxford University and Central Laser Facility, Rutherford Appleton in UK from 1990 to 1992, an assistant professor from 1993 to 1999 and an associate professor from 2000 to 2004 at Institute of Laser Engineering, Osaka University in Japan. He is now exploring high energy density science in methods of introducing a Plasma Photonics concept to control intense light and high energy density charged particles, including studies on the fast ignition concept in laser fusion and high energy density matter such as high pressure matter and warm dense matter. Professor Kodama received a Research Fellowships for Young Scientists of the Japan Society for the Promotion of Science (JSPS) in 1988, JSPS Special Postdoctoral Fellowships for Research Abroad in 1990. He also received the Daiwa Award from the Daiwa Anglo-Japanese Foundation in 1993, the Incentive Awards from the Japan Laser Society in 2002, the Excellence of Fusion Engineering Awards from the USA Fusion Power Associates in 2002, the Minister Prize on Science and Technology from the MEXT Japan in 2005, and The JSPS Prize from the JSPS in 2006.