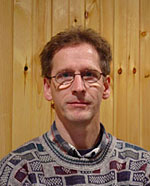 
"For his pioneering work in understanding the structure and growth of semiconductor surfaces and interfaces."


Ruud Tromp received a degree of Physics Engineer from the Twente University of Technology (the Netherlands) in 1978, with Prof.Dr. M.J. Sparnaay as his advisor. In 1982 he obtained his PhD degree in Physics from the University of Utrecht (Cum Laude), for research at the FOM Institute for Atomic and Molecular Physics in Amsterdam, with Prof.Dr. F.W. Saris as advisor, and Prof.Dr. M.J. Sparnaay as co-advisor. In 1983 he joined the IBM T.J. Watson Research Center as a Research Staff Member. At IBM he has held positions as manager of Interface Science, and of Analytical Science, as consultant to the IBM Corporate Technology Council, and presently as manager of Molecular Assemblies and Devices. His research interests include the structure and growth of surfaces and interfaces, surface phase transitions, modifications of crystal growth by organic and inorganic monolayers ('surfactants'), and the development of novel experimental techniques and methods.

Tromp was the recipient of the 1981 Wayne B. Nottingham Prize (Physical Electronics Conference), was elected member of the Boehmische Physical Society in 1984, and APS Fellow in 1993. He received IBM Outstanding Innovation and Technical Achievement Awards in 1987, 1991, and 1992. In 1995 he received the Materials Research Society Medal. He is a member of APS, AVS, MRS, and MSA. Besides other professional activities, he serves as a member of DOE's Basic Energy Sciences Advisory Committee. He is the author of about 200 scientific papers, and 6 US patents.