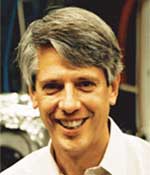 
"For creative and novel use of the hard xray free electron laser to isochorically create high density plasmas and accurately measure the ionization potential depression, and for new theory that addresses discrepancies with long standing models and provides stimulus for continued developments."


Roger Falcone received his degree in physics from Princeton University in 1974 and his Ph.D. in electrical engineering from Stanford University in 1979. Falcone has been a faculty member in the Physics Department at the University of California, Berkeley since 1983, and served as department chair from 1995 to 2000. Since 2006 he has served as the Director of the Advanced Light Source x-ray synchrotron facility at Lawrence Berkeley National Laboratory. Falcone's research involves the interaction of intense light with matter and he has published over 150 papers in this and related fields. Most recently his work has involved the use of the ultrashort pulse optical lasers to create warm and dense matter, the use of ultrashort pulse, extreme ultraviolet light to study chemical dynamics, the use of high-energy lasers to compress matter and create plasma x-rays that scatter from the matter, and the use of an x-ray laser to study plasmas. He received the Presidential Young Investigator Award of the NSF in 1984, was an APS Distinguished Lecturer from 1992-1993, and received the Halbach Prize for Instrumentation at the ALS at Berkeley Lab in 2000 and the APS Leo Szilard Award in 2005. Falcone is a fellow of APS, OSA, and AAAS.