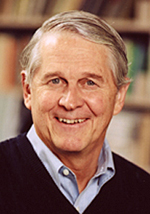 
"For his visionary leadership as the first Under Secretary of Commerce for Technology, for his outstanding research on the theory of magnetic data storage, and for his leadership at Control Data Corporation and Xerox."


White is currently University Professor of Electrical and Computer Engineering and Director of the Data Storage Systems Center at Carnegie Mellon University. From 1993 until 1999, he served as Head of the Electrical and Computer Engineering Department. Prior to joining CMU in 1993, he served during the Bush administration as the first Under Secretary of Commerce for Technology. In this role, White was responsible for overseeing the activities of the National Institute of Standards and Technology (NIST), the Office of the Assistant Secretary for Technology Policy, and the National Technical Information Service (NTIS). During his tenure in Washington, White established new programs to enhance U. S. competitiveness in critical technologies, such as the Advanced Technology Program (ATP). In 1993, he received the IEEE Public Service award for his leadership in this role.

Prior to going to Washington, White spent six years with Control Data Corporation, first as Vice President of Research for their Data Storage Products Group, and then as CDC's Chief Technical Officer and as a member of the CDC Management Board. In this latter role, he was responsible for establishing and managing CDC's participation in the flagship of research consortia, the Microelectronics and Computer Technology Corporation (MCC). White's early career was spent in teaching and research. He was Assistant Professor of Physics at Stanford University from 1968 through 1970. He then joined Xerox Corporation's legendary Palo Alto Research Center (PARC), where he spent thirteen years as a Principal Scientist. The author of four books -- among them the classic Quantum Theory of Magnetism -- White has also published over 140 technical articles on condensed matter physics, magnetic recording, and technology policy. One of his major contributions was the discovery and theory of spinwave sidebands in the optical spectra of magnetic materials. His current research deals with the origins of noise in magnetic tunnel junctions and spin-transfer induced noise in magnetic thin film structures.

White received his B.S. in physics from MIT in 1960, and his Ph.D. -- also in physics --from Stanford in 1964. He is a member of the National Academy of Engineering, and a Fellow of the APS, the IEEE, and the AAAS. In addition to the IEEE award previously mentioned, Dr. White was the recipient of the prestigious Alexander von Humboldt prize from Germany in 1980, spending six months as a Humboldt Fellow at the Max Planck Institute in Stuttgart. White also carried out research at the Cavendish Laboratory in England, the Ecole Polytechnique in Paris, and Osaka University in Japan. He is currently a Director of the National Science and Technology Medals Foundation (Washington, DC), and serves on the Board of Directors of several corporations.