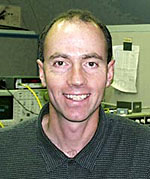 
"For the development of novel techniques in NMR spectroscopy and their application to a wide range of fundamental problems including work on Berry's phase, fullerenes, quantum wells, and amyloid fibrils."


Robert Tycko received his A.B. from Princeton University in 1980, and his Ph.D. in chemistry from the University of California at Berkeley in 1984. His thesis work with Alex Pines focused on new theoretical methods for designing and analyzing excitation sequences in NMR spectroscopy, especially the fixed point method. After postdoctoral research on biological solid state NMR methods with Stan Opella at the University of Pennsylvania from 1984 to 1986, Tycko became a Member of Technical Staff in the Physical Chemistry Research Department (later renamed the Materials Chemistry Research Department) at AT&T Bell Laboratories in Murray Hill, New Jersey. At Bell Labs, Tycko continued his work on NMR methodology and theory, and additionally carried out NMR studies of novel materials such as fullerences and superconducting alkali fullerides. Using optically pumped NMR, he carried out the first experimental studies of skyrmions in semiconductor quantum wells. In 1994, Tycko moved to the Laboratory of Chemical Physics, a physical chemistry and biophysics research department in the National Institute of Diabetes and Digestive and Kidney Diseases of the National Institutes of Health. Tycko is currently a member of the Senior Biomedical Research Service of the NIH. At the NIH, Tycko has made numerous contributions to solid state NMR methodology for structural studies of proteins and other complex molecular systems. A major project in recent years has been the elucidation of the molecular structures of amyloid fibrils that are associated with Alzheimers disease and related phenomena.

Tycko became a Fellow of the American Physical Society in 1997. He received an NIH Directors Award in 2001, and was the Norman Hascoe Distinguished Lecturer in physics at the University of Connecticut in 2001 and the Max T. Rogers Distinguished Lecturer in chemistry at Michigan State University in 2003. Tycko has served on the editorial boards of the Journal of Chemical Physics, the Journal of Magnetic Resonace, and Molecular Physics. He chaired the Gordon Research Conference on Magnetic Resonance in 2001, and has organized symposia on magnetic resonance, fullerenes, and amyloid fibrils for the American Physical Society, the American Chemical Society, and the Institute for Complex Adaptive Matter.