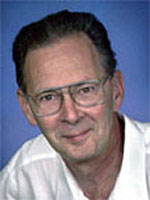 
"For his many diverse contributions and innovations in particle accelerator and detector technologies, including superconducting magnets, longitudinal stochastic cooling, bubble chambers and neutrino beam lines, crab crossing in lepton colliders, laser acceleration, and for leadership of the muon collider concept."


Dr. Palmer received his Ph.D. from Imperial College in London in 1960 where he built the first European hydrogen bubble chamber (4 in. dia). He then began his work at the Brookhaven National Laboratory and worked in the high energy physics bubble chamber group led by N. P. Samios. With Samios and Schutt he received the APS W.H.K. Panofsky prize for the discovery of the w- particle. During this time, he worked on large bubble chambers and measuring machines. He designed multiple horn neutrino beam systems, led the analysis of the first charmed baryon (1975), and was head of the Omega Physics Group (1975 - 1982).

Dr. Palmer was the first to observe, and contributed to the discovery of neutral currents in the CERN Gagamell heavy liquid bubble chamber (1972 - 1973). He proposed the inverse FEL acceleration mechanism (1970), stochastic cooling of momentum (1973), and acceleration over gratings (1980). With Bill Willis, he developed the Xenon wire chamber and led the analysis of the prototype ISABELLE magnet (1981). He was head of the ISABELLE Magnet Group (1982 - 1983), and proposed and constructed the first "two-in-one" accelerator magnet.

From 1983 to 1986, Dr. Palmer was the Associate Director for High Energy Physics, establishing the rare K decay program and obtained approval for AGS Boosters. From 1986 - 1991, he held a joint appointment with the Stanford Linear Accelerator Center (SLAC), working on Linear Collider R &D. In 1990 and 1991, he worked half time at SSC as Head of the National Task Force on 5 cm Dipole Magnet.

Since 1991, Dr. Palmer has been head of the Brookhaven National Laboratory Center for Accelerator Physics. Here he is responsible for programs at the Accelerator Test Facility, for Cluster Klystron development, and Muon Collider studies. He is an Adjunct Professor at the State University of New York at Stonybrook (1992 - Present). He is the 1996 recipient of the Brookhaven R&D Award and is a spokesperson for the Muon Collider Collaboration (1997 - Present).