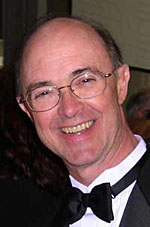 
"For groundbreaking experimental and theoretical contributions to the fundamental science and applications of liquid crystals, particularly their ferroelectric and chiral properties."


Robert Meyer received his Bachelor of Arts degree in Physics from Harvard University in 1965, and his Ph.D. in Applied Physics from Harvard in 1970, his thesis research on liquid crystals under the direction of David Turnbull. He continued as a postdoc and Assistant Professor in Applied Physics at Harvard, and was promoted to Associate Professor in 1974. After a year as Nordita Visiting Professor at Chalmers University in Goteborg, and Joliot Curie Professor at the Ecole Superieure de Physique et de Chimie Industrielles in Paris, he joined the faculty at Brandeis University in 1978, where he is currently Professor of Physics. Meyers research has addressed a wide range of topics involving the physics of liquid crystals and the exploration of novel soft materials based on them, focusing on chirality, electrical polarization, textures and defect structures, phase transitions, and responses to applied fields. He has been awarded the Joliot Curie Medal of the City of Paris, a special recognition award by the Society for Information Display, the Vinci of Honor award in the LVMH Science for Art Prize competition, and the 2004 Benjamin Franklin Medal in Physics by the Franklin Institute. He is a Fellow of the American Physical Society.