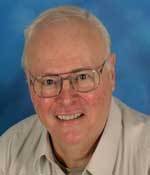 
"For pioneering contributions to the field of ultrafast laser science, including the discovery of supercontinuum generation and new laser materials, as well as the study of pulse propagation in strongly scattering media."


Robert R. Alfano, Distinguished Professor of Science and Engineering at The City College of the City University of New York, has contributed significantly to the field of ultrafast laser science and is a pioneer in the application of light and photonics technologies to the study of biological, biomedical and condensed matter systems. His contributions to these fields are documented in over 730 research articles, 111 patents, several edited volumes and proceedings, and over 12,400 citations. His crowning research achievements include discovery of supercontinuum, development of new tunable Cr3+/Cr4+ lasers, advance of laser spectroscopic and optical imaging techniques, and study of ultrafast optical pulse propagation and imaging in scattering media. He is a fellow of APS, OSA, IEEE, NY Academy of Science, and Alfred P. Sloan fellow. He has received his B.S. and M.S. in physics in 1963 and 1964  from Fairleigh Dickinson University and Ph.D. in physics from New York University in 1972. He spent 8 years at GTE Labs (now Verizon) from 1964 to 1972 before joining CCNY at 1972. He has received OSA Charles Hard Townes Award in 2008, Association of Italian American Educators Lifetime Achievement Award in 2012, and SPIE Britton Chance Biomedical Optics Award in 2012.