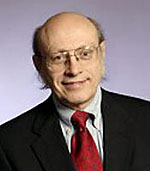 
"For his trail blazing contributions in the fields of Surface Enhanced Raman Scattering and Nanoparticle Optics."


Van Duyne received his BS in chemistry from the Rensselaer Polytechnic Institute in 1967 and his Ph.D. degree in analytical chemistry from the University of North Carolina, Chapel Hill in 1970. He then joined the faculty of the Department of Chemistry at Northwestern University. In 1986, he was named the Charles E. and Emma H. Morrison Professor of Chemistry. Among his other awards are the 1996 Surfaces in Biomaterials Foundation Excellence in Surface Science Award, the 1991 Pittsburgh Spectroscopy Award, the 1981 Phi Lambda Upsilon Fresenius Award, the 1980 Coblentz Memorial Prize in Molecular Spectroscopy, and an Alfred P. Sloan Foundation Award (1974-1978). Van Duyne is a Fellow of the American Physical Society and the American Association for the Advancement of Science.

Van Duyne is best known for his discovery of Surface-Enhanced Raman Scattering (SERS) and the developer of nanosphere lithography (NSL). His current research interests include nanoparticle optics and its application to ultrasensitive chemical sensing and biological sensing, nanoparticle based photonic devices, scanning probe microscopy, Raman spectroscopy of mass-selected clusters, and the application of SERS to ultrahigh vacuum surface science and studies of the structure and function of biomolecules adsorbed on surfaces.