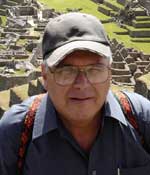 
"For providing critical insight into the evolution of nuclear structure with varying proton and neutron numbers and the discovery of a variety of dynamic symmetries in nuclei."


Rick Casten, D. Allan Bromley Professor of Physics at Yale, received his B.S from Holy Cross (1963), and Ph.D from Yale(1967) - the first thesis at the MP-1 Tandem accelerator.  After post-docs at the Niels Bohr Institute and Los Alamos National Laboratory, he went to Brookhaven National Laboratory in 1971, becoming a Senior Scientist and Group Leader of the Neutron Nuclear Structure Group in 1981, carrying out nuclear structure studies using neutron capture and the TRISTAN isotope separator. He came to Yale in 1995, as Director of the Wright Nuclear Structure Laboratory (WNSL) from 1995-2008.  He is a fellow of the APS, AAAS, the Institute of Physics(UK) and an Honorary Member of the Hellenic Nuclear Physics Society. He received the Senior US Humboldt Prize(1983), a Mercator Professorship (Germany), Honorary Doctorates from the Universities of Bucharest and Surrey, and the DNP Mentoring award.  He had many visits to the Institute Laue Langevin, the Institut fuer Kernphysics (Koeln), and CERN/ISOLDE.  He was Chair of NSAC(2003-2005) and the DNP(2008).  A leader in the field of exotic nuclei, he chaired the ISL Steering Committee(1989 - 2003), the RIA Users Organization (2006, 2007), and  the FRIB Science Advisory Committee(2009-2012).  He is an Associate Editor of Phys. Rev. C for Experimental Nuclear Structure. His research focuses on collectivity in nuclei, including:  dynamical symmetries [e.g., O(6)] of the IBA Model; structural trajectories and regularities in the IBA symmetry triangle ("Casten triangle"); quantum phase/shape transitions and critical point descriptions [E(5) and X(5)]; and microscopic drivers of collectivity, especially the p-n interaction.  He developed the NpNn scheme, the P-factor, and other simple approaches to structural evolution.  He exploited neutron Average Resonance Capture (ARC) for complete spectroscopy and the Gamma-Ray Induced Doppler (GRID) lifetime technique, and helped initiate medium energy Coulomb excitation. He authored the textbook "Nuclear Structure from a Simple Perspective".