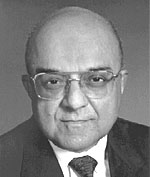 
"For the development of an understanding of the effects of intense ultraviolet light on biological materials, leading to an ability to 'photoetch' tissue surfaces precisely and safely, and for his role in developing applications to medicine in angioplasty, ophthalmology, and dermatology."


Dr. Srinivasan obtained his B.Sc in Chemistry and his M.S. in Physical Chemistry from the University of Madras, India. He received his Ph.D. in Physical Chemistry from the University of Southern California in 1956. After post-doctoral work at the California Institute of Technology and at the University of Rochester, he joined the IBM, T. J. Watson Research Center in Yorktown Heights, NY as a research staff member. He devoted the entire span of thirty years at the IBM Research Center to fundamental investigations on the action of ultraviolet photons from mercury lamps as well as excimer lasers on organic materials including small molecules, polymers and tissue. Since 1990 he has continued this work at his own company, UVTech Associates.

In addition to numerous awards received during his career at IBM, Dr. Srinivasan received a Guggenheim Fellowship in 1965, the 1997 National Award for Creative Invention from the American Chemical Society, the G.H. Esselen Award for Chemistry in the Public Interest in 1997 and the 1997 Indian Scientist of the Year Award from the Association of Indians in the U.S.