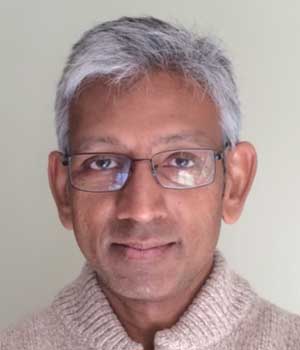 
Raman Sundrum is the John S.Toll Chair and a Distinguished University Professor at the University of Maryland, College Park. His research is in the areas of theoretical particle physics and cosmology.  Sundrum obtained his B.Sc. with first class honors from the University of Sydney in 1984, and his Ph.D. in physics from Yale University in 1990. His earlier awards include a 2001 Department of Energy Outstanding Junior Investigator Award, a 2003 American Physical Society Fellowship, and a 2011 American Association for the Advancement of Science fellowship. In addition to his body of work on warped higher-dimensional compactifications and their applications to modeling particle physics hierarchies, Sundrum pioneered and elucidated the subtle mechanisms of Anomaly-mediated Supersymmetry Breaking and Extra-dimensional and Conformal Sequestering. In recent years, he has studied the possible roles that long-lived neutral particles can play beyond the Standard Model, including naturally generating the matter/antimatter asymmetry of the universe or providing signatures of the otherwise elusive neutral naturalness scenario. These have helped spur recent major experimental efforts to detect such particles at colliders. Most recently, Sundrum has been studying novel aspects of cosmic inflation, showing how gauge theoretic structure at inflationary scales can be revealed in primordial non-Gaussianities, as well as how the stochastic background of gravitational waves from cosmological phase transitions can provide  complementary information on inflationary dynamics to that revealed by the cosmic microwave background. In addition to his research, Sundrum also gives talks on fundamental physics aimed at the general public, at schools and in public lectures. He is also frequently consulted by the scientific media on developments in particle physics and cosmology.