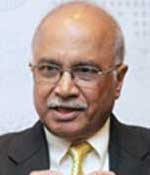 
"For outstanding contributions to promote global security issues, through critical analyses of nuclear weapons and nuclear energy programs in India and associated risks in the subcontinent, and efforts to promote peace and nuclear security in South Asia through extensive engagements and writings."


R.Rajaraman is currently Emeritus Professor of Physics at Jawaharlal Nehru University and co-chair of the International Panel on Fissile Materials. He completed his B.Sc (Honours) from Delhi University in 1958 and his PhD in theoretical physics in 1963 from Cornell University with Prof. Hans Bethe as his supervisor. He has since worked at Cornell, the Institute for Advanced Study at Princeton, Delhi University, and the Indian Institute of Science, in addition to sabbaticals at Harvard, Stanford, MIT, CERN, and numerous summer visits to Princeton University. His physics research areas include nuclear many-body theory, particle physics, quantum field theory, Solitons, and Quantum Hall systems.

In addition he has done technical research on nuclear disarmament and nuclear energy and contributed to the public debate through articles and lectures. He was arguing against India developing nuclear weapons long before its first nuclear test in 1974. After the Indian and Pakistani tests in 1998, he has repeatedly urged capping the nuclear arsenals of both countries using technical and strategic arguments. He has championed nuclear de-alert agreements and other confidence building measures at track II meetings with Pakistani and Chinese colleagues. He has calculated fissile material production and stocks in S. Asia and analyzed the prospects for FMCT.

He has also been writing on safety and transparency in India’s nuclear energy program, from well before the Fukushima tragedy