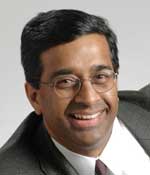 
Ramamoorthy Ramesh graduated from the University of California, Berkeley with a Ph. D. in 1987.  He returned to Berkeley in 2004 and is currently the Plato Malozemoff Chair Professor in Materials Science and Physics. Prior to that he was Distinguished University Professor at the University of Maryland College Park. From 1989-1995, at Bellcore, he initiated research in several key areas of oxide electronics, including ferroelectric nonvolatile memories.  His landmark contributions in ferroelectrics came through the recognition that conducting oxide electrodes are the solution to the problem of polarization fatigue, which for 30 years, remained an enigma and unsolved problem. In 1994, in collaboration with S. Jin (Lucent Technologies), he initiated research into manganite thin films and they coined the term, Colossal Magnetoresistive (CMR) Oxides. At Berkeley, he continues to pursue key scientific and technological problems in complex multifunctional oxide thin films, nanostructures and heterostructures. His group demonstrated the existence of a large ferroelectric polarization in multiferroic BiFeO3 films, in agreement with first principle predictions; they also demonstrated electric field control of antiferromagnetism as well as ferromagnetism, a critical step towards the next generation of storage and spintronics devices that are completely electric field controlled. His current research interests include thermoelectric and photovoltaic energy conversion in complex oxide heterostructures. He has published extensively on the synthesis and materials physics of complex oxide materials.  He received the Humboldt Senior Scientist Prize and Fellowship to the American Physical Society (2001). In 2005, he was elected a Fellow of American Association for the Advancement of Science as well as the David Adler Lectureship of the American Physical Society. In 2007, he was awarded the Materials Research Society David Turnbull Lectureship Award and  in 2009, he was elected Fellow of MRS.