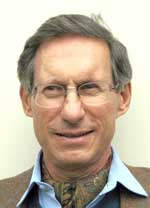 
"For transforming the safeguards culture and procedures of the IAEA, greatly strengthening its ability to detect nuclear proliferation activities, and for his courage and integrity, especially in the period 2002 - 2003."

He is member of the Board of Directors and of the Executive Committee of the Association Vinçotte Nuclear, a non-profit organization in charge of verifying compliance with safety regulations of Belgian nuclear power plants and other facilities.

Goldschmidt has been Deputy Director General, Head of the Department of Safeguards, at the International Atomic Energy Agency, from May 1999 to June 2005. During that period the Department of Safeguards has shifted its emphasis from a facility-by-facility material accountancy approach to an integrated State evaluation process and has improved its capability to detect undeclared nuclear material and activities.

Before assuming this position, Goldschmidt was, for 12 years, Director General of SYNATOM, the company responsible for the fuel supply and spent fuel management of seven Belgian nuclear plants.

Goldschmidt has headed numerous European and international committees, and is the author of some 100 publications. He has recently published op-eds on non-proliferation issues in several newspapers and has appeared in a number of television interviews.

He received a number of cultural and scientific awards, and became, in November 2005 Doctor Honoris Causa of the University of Brussels. He was nominated Officier de lOrdre National du Mérite (France) in 1995 and Grand Officier de lOrdre de la Couronne (Belgium) in 2006.