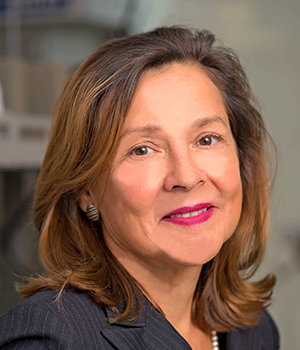 
"for her pioneering research at the intersection of optics and nanoscience, and groundbreaking applications of those findings in the field of plasmonics, and for her exceptional impact communicating the excitement of scientific discoveries and their vital role in improving people’s lives."


Naomi Halas is the Rice University Stanley C. Moore Professor in Electrical and Computer Engineering, and professor of chemistry, physics and astronomy, bioengineering, and materials science and nanoengineering. She is the founding director of Rice’s Laboratory for Nanophotonics and director of the Smalley-Curl Institute. She was a graduate research fellow at IBM Yorktown, and served as a postdoctoral associate at AT&T Bell Laboratories prior to joining the Rice faculty in 1990. Halas is one of the pioneering researchers in the field of plasmonics, creating the concept of the “tunable plasmon” and inventing a family of nanoparticles with resonances spanning the visible and infrared regions of the spectrum. Halas pursues fundamental studies of coupled plasmonic systems as well as applications of plasmonics in biomedicine, optoelectronics, chemical sensing, photocatalysis, and solar steam generation with applications in off-grid water treatment. She is a recipient of the American Physical Society (APS) Frank Isakson Prize for Optical Effects in Solids and the R. W. Wood Prize of the Optical Society of America. She is a fellow of the APS, Optical Society of America, the International Society for Optics and Photonics, the Institute of Electrical and Electronics Engineers, the Materials Research Society, and the American Association for the Advancement of Science. She is a member of the National Academy of Engineering, the National Academy of Sciences, and the American Academy of Arts and Sciences.