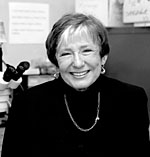 Sarachik has served the physic community in many ways, including as a member (and chair) of the Solid State Sciences Committee of the NRC, the Human Rights Committee of the New York Academy of Sciences and the Board of the Committee of Concerned Scientists. She served as President of the American Physical Society in 2003.

An experimentalist working at low temperatures, Sarachik has investigated superconductors, disordered metallic alloys, metal-insulator transitions in doped semiconductors, hopping transport in solids, strongly interacting electrons in two dimensions, and spin tunneling in nanomagnets. She received the 1995 New York City Mayor's Award for Excellence in Science and Technology and a 2004 Sloan Public Service Award from the Fund for the City of New York. She is a member of the National Academy of Sciences, and a fellow of the American Academy of Arts and Sciences, the American Physical Society, the New York Academy of Sciences, and the American Association for the Advancement of Science.