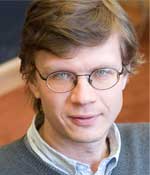 
"For pioneering theoretical and experimental work at the interface between quantum optics, quantum information processing, and the quantum many body problem."


Mikhail Lukin received the Ph.D. degree from Texas A&M University in 1998. He was a post-doctoral fellow at the Institute for Theoretical Atomic and Molecular Physics at Harvard University from 1998-2001. He joined the faculty of Harvard Physics Department as an Assistant Professor in 2001 and has been a Professor of Physics at Harvard since 2004. He is a fellow of the Optical Society of America. His research interests include quantum optics, quantum control of atomic and nanoscale solid-state systems, quantum dynamics of many-body systems and quantum information science. He has co-authored over 150 technical papers and has received a number of awards, including Alfred P. Sloan Fellowship, David and Lucile Packard Fellowship for Science and Engineering, NSF Career Award, Adolph Lomb Medal of the Optical Society of America (200) and AAAS Newcomb Cleveland Prize. His research group webpage is http://lukin.physics.harvard.edu/.