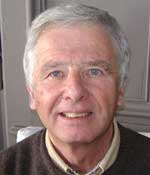 
"For distinguished leadership in the conception, design, and construction of the ATLAS and CMS detectors, which were instrumental in the discovery of the Higgs boson."


Michel Della Negra, Ph.D., physicist emeritus of the physics department of CERN, in Geneva, Switzerland, is presently Compact Muon Solenoid emeritus at Imperial College London. Born in 1942, a graduate of the École Polytechnique, Paris, he began his career at the Laboratory of Nuclear Physics of the College de France. In 1967, he defended his thesis on the study of proton-antiproton annihilations at rest using bubble chamber photographs. After a post-doctoral stay at Stanford Linear Accelerator Center (SLAC) in Palo Alto, California, from 1970 to 1972 where he worked on a deep inelastic muon experiment, Dr. Della Negra turned to high pT physics with the Split Field Magnet (SFM) experiment at the CERN ISRs. In 1977, he joined the team led by Carlo Rubbia, Ph.D., proposing a proton-antiproton collider in the Super Proton Synchrotron (SPS). He contributed decisively to the design of a 4pi detector, which was UA1, approved in 1978, leading to the discovery in 1981 of the W and Z bosons. In 1989, Dr. Della Negra, along with Dr. Virdee, were among the first physicists to have imagined a 4pi detector for the large hadron collider (LHC) based on a strong magnetic field: the Compact Muon Solenoid (CMS) was born. Dr. Della Negra was the spokesperson for CMS from 1992 through 2006. In July 2012, the discovery of the Higgs boson by both A Toroidal LHC Apparatus (ATLAS) and CMS experiments was announced. Dr. Della Negra is the recipient of the 1977 Joliot-Curie Prize, awarded by the French Society of Physics, the 1984 Centre National de la Recherche Scientifique Silver Medal, and with Professor Dr. Peter Jenni, the 2012 Julius Wess Prize from the Karlsruher Institut für Technologie. Along with his LHC co-pioneers, Dr. Della Negra is the recipient of the 2013 Fundamental Physics Breakthrough Prize. With Prof. Dr. Virdee, Prof. Dr. Jenni, and their CMS and Atlas collaborators, Dr. Della Negra received the 2013 High Energy and Particle Physics Prize from the European Physical Society. Dr. Della Negra is also the recipient of the 2014 André Lagarrigue Prize awarded by the French Society of Physics.