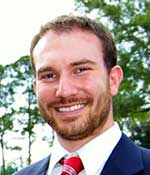 
"For first experimental demonstration of the importance of kinetic and multi-ion effects on fusion rates in a wide class of inertial confinement fusion implosions, and for use of proton diagnostics to unveil new features of magnetic reconnection in laser-generated plasmas."


Michael Rosenberg received his B.A. in Physics with high honors from Swarthmore College in 2008, conducting research in spectroscopic analysis of photoionized laboratory plasmas. He continued his studies in plasma physics at the Massachusetts Institute of Technology, joining the High Energy Density Physics (HEDP) Division, led by Dr. Richard Petrasso, at the Plasma Science and Fusion Center. He earned his PhD in Plasma Physics in 2014. His dissertation research spanned multiple areas in HEDP and fundamental plasma physics, including the demonstration of ion kinetic effects over a range of plasma conditions in shock-driven laser inertial confinement fusion (ICF) implosions as well as the investigation of magnetic reconnection using laser-generated plasmas in the strongly flow-driven regime.

Michael is now a research associate at the University of Rochester's Laboratory for Laser Energetics, where he leads experiments to understand laser-plasma interactions in long-scale-length plasmas at the National Ignition Facility, relevant to direct-drive ICF. He is a member of the American Physical Society.