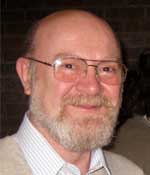 
"For his development of the random current approach to correlations which has had an impact on a wide variety of problems, especially his rigorous non-perturbative proof of the triviality of Æ4 field theory"


Michael Aizenman is a mathematical physicist at Princeton University.

He was awarded the Norbert Wiener Prize (1990) of the Amer. Math. Soc. and SIAM for "his outstanding contribution of original and non-perturbative mathematical methods in statistical mechanics by means of which he was able to solve several long open important problems concerning critical phenomena, phase transitions, and quantum field theory."   More recently he has been working on quantum effects of quenched disorder.

Member of the National Academy of Sciences since 1997, he is also the recipient of the Brouwer Medal (2002) of the Dutch Math. Soc. and Royal Dutch Acad. Sc., and  Dr. Honoris Causa of Université de Cergy-Pontoise (France, 2009).

Michael Aizenman received his undergraduate education at the Hebrew University of Jerusalem, and PhD degree in 1975 at Yeshiva University (Belfer Graduate School of Science), New York, advised by Joel Lebowitz.  After postdoctoral appointments at Courant Institute of NYU,  197475, and Princeton University  197577 with Elliott Lieb, he was Assistant Professor at Princeton. In 1982 he moved to Rutgers University as Associate Professor and then full Professor. In 1987 he moved to the Courant Institute and in 1990 returned to Princeton as Professor of Mathematics and Physics.