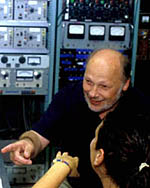 
Michael Wiescher is presently the director of the Joint Institute of Nuclear Astrophysics (JINA) and Freimann Professor of Physics at the University of Notre Dame. His present research interests span from nucleosynthesis scenarios during late stellar evolution to the fate of matter on accreting white dwarfs and neutron stars. His research program concentrates both, on laboratory measurements as well as computer simulation of the associated nuclear reactions and reaction sequences driving stellar evolution and stellar explosion.

Michael Wiescher received his physics diploma at the University of Münster, Germany in 1974. For his graduate studies he turned to the field of nuclear astrophysics and got his PhD in 1980 at Münster as a student of Claus Rolfs. His interests evolved in time from experiments exploring the Carbon-Nitrogen-Oxygen cycle in stellar hydrogen burning to a wide panorama of experimental studies at stable beam, radioactive beam, and neutron beam facilities. Theoretical simulations of various nucleosynthesis processes guide the direction of his experimental program. Wiescher developed a pioneering scientific program of close collaboration between nuclear physicists and astrophysicists within the highly interdisclipinary field of nuclear astrophysics.

Michael Wiescher is very active in the future planning of the field from the motivation and construction of Rare Isotope Accelerator RIA to the Underground Laboratory. The first will help to study nucleosynthesis processes in explosive scenarios from Big bang to supernovae. An underground laboratory based accelerator is crucial for the study of slow reactions that drive and control stellar evolution. He views the development and construction of new experimental facilities for simulating stellar and cosmological processes as an important complement to the present construction of new satellite as well as ground based telescope facilities to observe these very processes.

He is particularly grateful to his long-time collaborators, Dick Azuma (U.Toronto) Joachim Görres (Notre Dame) and Franz Käppeler (FZ Karlsruhe) and proud of his present and former graduate students. Some of them, Christian Iliadis (UNC) and Hendrik Schatz (MSU) have become leaders in this growing area of Nuclear Astrophysics in their own right.