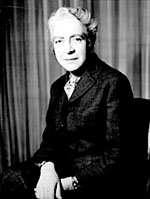 
"For tireless efforts in physics education, for continued work in preserving the history of physics as well as other service to the physics community, for her role in founding the Federation of American Scientists, and as a model of a principled scientist."


Melba Newell Phillips majored in mathematics and English Literature at Oakland City College in Indiana, and received a B.A. She earned an MA in physics from Battle Creek College in 1928 and a Ph.D from the University of California at Berkeley in 1933. She did research in atomic and molecular physics with such greats as J. Oppenheimer and Eugene Feenberg. She has held faculty positions or fellowships at the University of California-Berkeley, Bryn Mawr College, the Institute for Advanced Study, Connecticut College, Brooklyn College, the University of Minnesota, Washington University St. Louis, University of Chicago, and the State University of New York at Stony Brook. Many students who attended those institutions remember her as an outstanding teacher. She has authored two much-used textbooks: PRINCIPLES OF PHYSICAL SCIENCE with Francis Bonner and CLASSICAL ELECTRICITY AND MAGNETISM with W.K.H. Panofsky.

Melba served as AAPT President 1966-67 and as Executive Officer in 1975-77. She involved herself in essentially all aspects of AAPT's activities. In 1985 Spencer R. Weart and Melba edited HISTORY OF PHYSICS, Readings from Physics Today. Also in 1985 she edited PHYSICS HISTORY FROM AAPT JOURNALS and in 1992 Melba edited THE LIFE AND TIMES OF MODERN PHYSICS, History of Physics II, for the American Institute of Physics.

Honors include: The OERSTED MEDAL in 1974 for notable contributions to the teaching of physics. The KARL TAYLOR COMPTON AWARD in 1981 for distinguished statesmanship in science. In 1981 the American Association of Physics Teachers created an award, the MELBA NEWELL PHILLIPS AWARD, for exceptional contributions to physics education through leadership in the AAPT. Melba was the first recipient of this award.