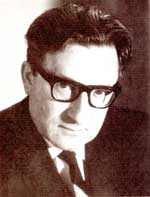 
"For his groundbreaking historical studies of fundamental concepts in physics, including his comprehensive account of the development of quantum mechanics."


Jammer, born 1915 in Berlin, left Germany, after graduation from high school in 1932, to study physics, mathematics and philosophy at the University of Vienna and subsequently at Hebrew University in Jerusalem, where he opbtained his M.A. in 1936 and his Ph.D. in 1942. After active service in the British Army he joined 1946 the faculty of Hebrew University to teach history and philosophy of physics. After receiving a post-doctoral fellowship he became in 1952 lecturer at Harvard University, where he wrote Concepts of Space (Harvard University Press, 1954). It carries a Foreword by Albert Einstein with Oklahoma. In 1956 Jammer joined the faculty of Bar-Ilan University in Israel where he subsequently became Rector and President. Having personally interviewed leading physicists, like Bohm, Born, de Broglie, Dirac, Heisenberg and Jordan, Jammer wrote his books on the history and philosophy of quantum mechanics and of fundamental physical concepts, like Force, Mass (Princeton Univ. Press, 1999) and, most recently, Simultaneity (Johns Hopkins Univ. Press, 2006). He received the Israel Prize and amongst other awards the Monograph Prize of the American Academy of Arts and Sciences.