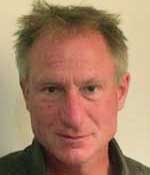 "For discovery and pioneering investigations of the superconductor-insulator transition, a paradigm for quantum phase transitions."


Matthew Fisher obtained a bachelors degree in Engineering Physics from Cornell University
in 1981, and a Ph.D. in theoretical physics from the University of Illinois at Urbana-
Champaign in 1986. He was a Visiting Scientist and then Research Staff Member at IBM
T. J. Watson Research Center from 1986 to 1993, before joining the Kavli Institute for
Theoretical Physics in Santa Barbara. In 2007 Fisher joined Microsoft’s Station Q as a
research physicist, and was on the Caltech faculty from 2009 to 2010. Since 2010 Fisher has been in the UC Santa Barbara physics department. Fisher’s research has focussed broadly on theories of strongly interacting quantum-many body systems, especially those which exhibit exotic behavior. Examples include, superconductor/superfluid-insulator transitions, one-dimensional Luttinger liquids, fractional quantum Hall bulk and edge states, Quantum Spin liquids in frustrated magnets, Bose metal phases, Deconfined Quantum Critical phase transitions, Non-Fermi liquid phases of 2d electrons, bosonic Topological insulators in 3d, among other topics. In 1995, Fisher received the Alan T. Waterman Award bestowed by the National Science Foundation, and has also been the recipient of the National Academy of Sciences Award for Initiatives in Research (1997). He was elected as a Member of the American Academy of Arts and Sciences in 2003 and to the National Academy of Sciences in 2012.