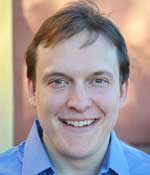 
"For seminal studies of ultracold Fermi gases, including precision measurements of the equation of state, the observation of superfluidity, solitons, vortices, and polarons, the realization of a microscope for fermions in a lattice; and the production of chemically stable polar molecules."


Martin Zwierlein, Ph.D., studied physics at the University of Bonn and at the École Normale Supérieure (Paris, France). He received his Ph.D. from the Massachusetts Institute of Technology (Cambridge) in 2007, with a thesis supervised by Wolfgang Ketterle, Ph.D., on the observation of superfluidity in atomic Fermi gases. After a postdoctoral stay at the University of Mainz (Germany) in the group of Immanuel Bloch, Ph.D., he joined the MIT physics department  in 2007; he has been a Full Professor of Physics since 2013. Dr. Zwierlein’s research focus lies on the creation and study of strongly interacting Fermi gases of atoms and molecules. These gases host novel states of matter and serve as pristine model systems for other Fermi systems, such as neutron stars or high-temperature superconductors. Dr. Zwierlein’s group currently studies the Fermi-Hubbard model with single atom resolution, and is working towards low-entropy states of spin-imbalanced Fermi gases and dipolar molecules. His awards include the 2007 Klung-Wilhelmy-Weberbank Prize, 2010 Young Investigator awards from the Air Force Office of Scientific Research, the Office of Naval Research and DARPA, a David and Lucile Packard Fellowship in 2010, and a 2010 Presidential Early Career Award for Scientists and Engineers.