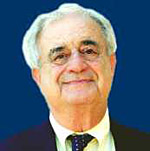 
"For inspirational leadership and personal caring in the development of the skills and commitment of the succeeding generations of scientific leaders in plasma physics and for many years of continual successful promotion and participation in international scientific collaborations."


I received my B.S. from Harvard in 1945. Following a brief stint in the Navy as a radar repairman, I entered Graduate School at the University of Chicago as a member of the remarkable postwar class which included many future physics luminaries from whom I learned much. After my Ph.D. in 1949 I spent a year as an Instructor at Stanford. During this early phase of my career I aspired to be a high energy physicist working on such topics as the Universal Fermi Interaction and electron-proton scattering.

In 1950, I felt it was my duty to go to Los Alamos where I was heavily involved in the early work on the physics of thermonuclear explosions. In 1953, following the success of our H-bomb program and the death of Stalin, I searched for a physics focus for my subsequent career. Always fascinated by statistical physics, I invented the canonical-ensemble Monte Carlo algorithm, but soon decided on Controlled Fusion as a field replete with fascinating physics. I remain convinced that fusion will eventually prove to be essential for the continuance of our energy-based civilization.

To summarize in a few words my work of the last 45 years at UCSD, General Atomics, ITER, the Institute for Advanced Study in Princeton and at IFS at UT Austin, the focus has been to understand how and to what extent the complexities of the microscopic physics of magnetized plasmas can be incorporated into descriptions macroscopic enough for eventual fusion reactor designs. Perhaps my biggest intellectual thrill was to see how the magnetic field could force a collisionless plasma to obey hydrodynamic type equations with enough fascinating differences to keep us all (and ever larger computers) busy for many decades.

A major factor in my continued satisfaction with plasma physics has been the many, many truly wonderful people with whom I have learned, taught, and enjoyed over the years. Many of you are here at this meeting but space and time preclude mentioning specific names. I soon found out that physics and concerns for the energy future know no national boundaries. A real highlight in my life was participation in the early days of the International Center at Trieste, at that time a unique place for East and West, as well as Third World, physicists to meet. There I became familiar with the seminal thinking of the Soviet scientists and had the opportunity to see the early stages of the European and Japanese fusion programs. I like to think that the rapport among physicists we developed there played a useful role in the subsequent evolution of the international fusion program as well as the Arms Control "Mafia".

To supplement the physics and personal joys of my career, I have been over-generously rewarded with honors-the Lawrence, Einstein, Maxwell,and Fermi Prizes,as well as the National Medal of Science. To receive now the Nicholson Medal is both a great surprise and a source of much satisfaction as an indication that the warm regard I hold for all of you is at least partly reciprocated.