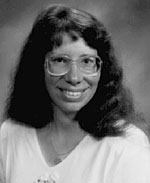 
"For her innovative application of electron spectroscopies to surfaces and interfaces that has elucidated the importance of interfacial reactions on the structure, properties and morphology of both the interface and growing film in systems involving dissimilar materials, especially when heteroepitaxy is involved."


Marjorie Olmstead's primary research effort probes the chemical, structural, and kinetic constraints controlling the heteroepitaxy of strongly disparate materials. She also studies the role of local geometry and electronic structure on photoelectron energies and satellite excitations in insulators. Her photoelectron spectroscopy and diffraction experiments investigating ionic crystal growth on semiconductor surfaces showed the importance of interfacial reactions, lattice mismatch, and the competition among nucleation pathways in determining the structure and morphology of a heteroepitaxial film.

Prof. Olmstead received a National Science Foundation Presidential Young Investigator Award in 1987, and an IBM Faculty Development Award in 1986. In 1994, she was awarded the Peter Mark Memorial Award and elected fellow by the American Vacuum Society.