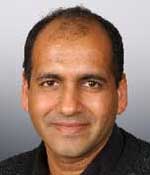 
"For outstanding contributions to promote global security issues, through critical analyses of nuclear weapons and nuclear energy programs in India and associated risks in the subcontinent, and efforts to promote peace and nuclear security in South Asia through extensive engagements and writings."


M.V. Ramana received his undergraduate degree in physics from the Indian Institute of Technology, Kanpur in 1988 and his Ph.D. in theoretical physics from Boston University in 1994. He has held research positions at the University of Toronto, the Massachusetts Institute of Technology, and Centre for Interdisciplinary Studies in Environment and Development, Bangalore, and taught at Boston University, Princeton University, and Yale University. He is currently with the Nuclear Futures Laboratory and the Program on Science and Global Security at the Woodrow Wilson School of Public and International Affairs, Princeton University. His research interests span a broad range and include topics related to energy, environment, security, and science and technology policy. Currently, he has been involved in the ongoing debates surrounding the expansion of nuclear power in the context of nuclear disarmament and climate change. Ramana is the author of The Power of Promise: Examining Nuclear Energy in India (Penguin Books, 2012) and co-editor of Prisoners of the Nuclear Dream (Orient Longman, 2003). He is a member of the International Panel on Fissile Materials and the Science and Security Board ofthe Bulletin of the Atomic Scientists. In 2003, he was awarded a Guggenheim Fellowship.