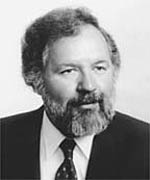 
"For the synthesis of novel d and f electron materials and for the study of their physics."


M. Brian Maple is the Bernd T. Matthias Professor of Physics at the University of California, San Diego (UCSD). He received an AB in mathematics and a BS in physics from San Diego State University (SDSU) in 1963, and a Ph.D. in physics from UCSD in 1969. His research interests include superconductivity, magnetism, strongly correlated electron phenomena, high pressure physics, and surface science. Professor Maple is a Fellow of the APS and the AAAS, served as chairman of the APS Division of Condensed Matter Physics in 1987, and presided over the celebrated high Tc superconductivity session (the "Woodstock of Physics") during the 1987 APS March meeting. He has chaired or co-chaired ten international conferences, has served on Advisory Committees for seven national laboratories and on two IUPAP Commissions. He has served on review committees for the DOE, NSF, and numerous universities.