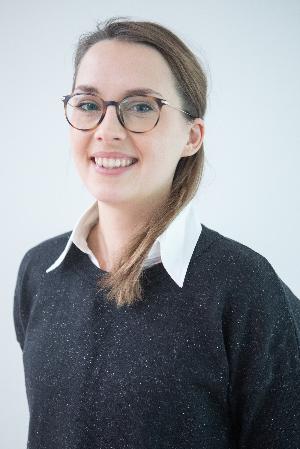 
Lieselotte Obst-Huebl received her diploma degree (equivalent to a master’s degree) in Physics from Technical University Dresden (TUD) in Germany in 2014. She conducted research for her diploma thesis in the Laser-Particle Acceleration Division of Helmholtz-Zentrum Dresden-Rossendorf (HZDR), where she had already gained experience as a student researcher in the field of ultra-high intensity laser-matter interaction. After her graduation from TUD she spent five months at Laboratoire pour l’Utilisation des Lasers Intenses (LULI) of École Polytechnique in Palaiseau, France. In 2015 she returned to HZDR and TUD to pursue her PhD under the supervision of Prof. Ulrich Schramm and Prof. Thomas E. Cowan. Her research at HZDR focused on high-performance laser-proton acceleration from renewable target systems, for example a continuous cryogenic hydrogen jet, as well as the investigation of laser-induced spatial structures in the accelerated proton beam profile. During her time as a doctoral student, she conducted and supported experiments at HZDR’s DRACO laser, at LULI and at the Matter in Extreme Conditions instrument of the LCLS at SLAC. After receiving her PhD in 2019, Lieselotte moved to Berkeley/CA to become a postdoctoral fellow at Lawrence Berkeley National Laboratory, where she presently conducts research directed at laser-particle acceleration at the BELLA PW laser.