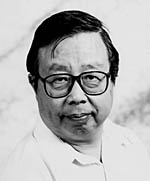 
"For his courageous struggle for democracy and human rights in China over the past four decades; for his continued commitment to teaching and his outstanding leadership in physics research despite difficult circumstances; and for his continuing support and dedication to students, colleagues, and those fighting for human rights."


Li-Zhi Fang (Western version) or Fang Lizhi (Chinese version) was born in Beijing in 1936. He received his diploma from Beijing University in 1956 and immediately joined the Chinese nuclear project as a junior researcher. For his speaking out on freedom of thought and expression, Fang was dismissed, and transferred to the University of Science and Technology of China (USTC) as an assistant professor in 1958 and lecturer in 1961. During the Cultural Revolution (1966-1976), he was sent to do labor in the country-side and in the coal mine. In 1978, Fang became a full professor and later the Vice-President of the USTC in 1984. Owing his support for the student movement in 1986, Fang was once again dismissed, and moved to the Beijing Astronomical Observatory in 1987.

Following the bloody event on Tiananmen Square on June 4th, 1989, Fang was named the most wanted counter-revolutionary criminal by the Chinese authorities. He then sought sanctuary in the US Embassy in Beijing, where he remained for over a year. When he left China in 1990, he stopped at the Cambridge University as a Guest Professor of the Royal Society, and in the following year at the Institute for Advanced Study of Princeton as a Director's Visitor. Since 1992, Fang joined the faculty of the University of Arizona as a Professor of Physics and Astronomy.

Fang's research has covered nuclear physics, laser physics, and a variety of topics in theoretical astrophysics and cosmology. He has published more than 230 papers, and also numerous popular articles. He is the author, co-author and editor of 20 more books. Fang has been a member of many scientific committees, including the council of the International Center for Theoretical Physics (Trieste), Commission No. 2 of IUPAP, and 1990 - 1993 Chair of the Commission C19 of IUPAP.

Fang was a member of the Chinese Academy of Science. He is a fellow of the American Association for the Advancement of Science, and honored with Honorary Life Membership of the New York Academy of Sciences. Fang is the recipient of numerous awards, including the 1978 (Chinese) National Award of Science and Technology, 1985 First Award of the Gravity Research Foundation, 1987 (Chinese) National First Award for Scientifically Popular Article, 1989 Human Rights Award of Robert F