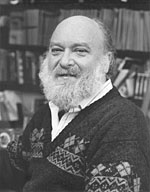 
"For his numerous and profound contributions to statistical physics, including the introduction of the concepts of universality and block spin scaling that are central to the modern understanding of the critical phenomena."


Dr. Kadanoff received his academic degrees from Harvard University during the period 1957 - 1960. After a postdoctoral period at Niels Bohr Institute in Copenhagen, he joined the staff of the University of Illinois in 1962 and became Prof. of physics in 1965. During this period he carried out research activities aimed at understanding the properties of matter, especially the phenomenon of superconductivity, and R & D work aimed at heat protection for ballistic missiles. In 1966 and 1967 he did some research upon the organization of matter in "phase transition" which led to a substantial modification of physicists' way of looking at these changes in the state of matter.

In 1969, Dr. Kadanoff moved to Brown University where he became a University Professor. In parallel, he conducted research on mathematical models for urban growth, and upon solid state physics. Then, in 1978, Dr. Kadanoff moved to the University of Chicago where he became (in 1982) the MacArthur Distinguished Service Professor of Physics and Mathematics. After a period in which he worked mostly upon the applications of universality and scale invariance to phase transitions and particle physics, his attention turned to disorder, turbulence and chaos in physical systems. In his teaching, he has also been particularly interested in the applications of computers to physical calculations.

Dr. Kadanoff has contributed widely to research in the properties of matter, the development of urban areas, and upon statistical models of physical systems. His best-known contribution was in the development of concepts of "block scaling" and "universality" as they applied to phase transitions. More recently, he has been involved in the understanding of the development of chaos and of structures in simple mechanical and fluid systems.