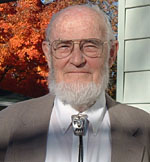 
"For fundamental contributions to accelerator science including the FFAG concept and the invention of the RF phase manipulation technique that was essential to the success of the ISR and all subsequent hadron colliders."


Harvard University in 1948. He taught at Wayne University in Detroit from 1947 to 1955, and at the University of Wisconsin-Madison from 1955 until he retired in 1989. From 1956 to 1967 he was a staff member of the Midwestern Universities Research Association, and its Technical Director in 1957-60. He chaired the Argonne Accelerator Users Group in 1961-62, was Acting Director of the Madison Academic Computing Center in 1982-83, and Acting Director of the UW-Madison Synchrotron Radiation Center from 1983 to 1985. His research areas are the theory and design of particle accelerators and theoretical plasma physics. He invented the FFAG accelerator design, and contributed to the theory of radio-frequency acceleration, collective instabilities, and colliding beam techniques. He developed bit-pushing and distribution-pushing techniques for the numerical solution of the Vlasov equation for the study of collective instabilities in plasmas and accelerator beams. He wrote a textbook Mechanics, 1953, third edition, 1971. He is a Fellow of the American Physical Society and of the American Association for the Advancement of Science, and a member of the American Association of Physics Teachers. He is a recipient of the 2003 Particle Accelerator and Technology Award of the IEEE, and a Distinguished Faculty Fellow of the Physics Department of the University of Wisconsin-Madison.