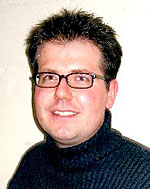 
"For his role in the generation and analysis of the data from the Sudbury Neutrino Observatory, and the resulting resolution of the solar neutrino problem."


Karsten Heeger received his Ph.D. in August 2002 from the University of Washington in Seattle where he worked with Prof. R.G. Hamish Robertson on a model-independent measurement of the solar 8B neutrino flux in the Sudbury Neutrino Observatory (SNO). The results from SNO demonstrated the effect of flavor change in solar neutrinos and resolved the long-standing Solar Neutrino Problem. During his graduate career Karsten received several awards, including a graduate fellowship from the Mellam Foundation. He graduated from Oxford University in 1995.

He is a Chamberlain Fellow in the Physics Division at Lawrence Berkeley National Laboratory and a member of the KamLAND experiment, which recently confirmed the hypothesis of solar neutrino oscillation using terrestrial neutrinos. His current research interests include neutrino physics and weak interactions.

For several years Karsten has been involved in the activities of professional organizations. He serves as the 2003 Chair of the APS Forum on Graduate Student Affairs (FGSA) and has participated with the APS Office of Public Affairs in lobbying Congress on issues related to the physical sciences. He is a member of the Institute of Physics (MInstP) and the European Physical Society.