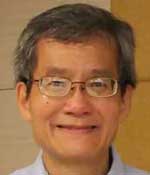 
"For their leadership of the Daya Bay experiment, which produced the first definitive measurement of the theta-13 angle of the neutrino mixing matrix."

He has worked on dimuon and hyperon physics. Besides introducing a technique for measuring the magnetic moment of the Omega-minus, he found unexpected transverse polarization of the charged anti-Xi produced in unpolarized proton-nucleus collision. In 2000, he joined KamLAND, focussing on neutrino physics. A few years later, he initiated the Daya Bay experiment and has been actively involved in all phases.

Luk is a recipient of the R. R. Wilson Fellowship from Fermilab, Outstanding Junior Investigator Award from the Department of Energy, Alfred P. Sloan Fellowship, and Changjian Scholar Chair Professorship from the Ministry of Education of China. He is a Fellow of the American Physical Society, a member and divisional coordinator for particle physics of the International Organization of Chinese Physicists and Astronomers. Currently, Luk is a Hung Hing Ying Distinguished Visiting Professor in Science of the University of Hong Kong.