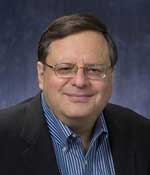 
"For innovations in angle-resolved photoemission spectroscopy, which advanced the understanding of the cuprate superconductors, and transformed the study of strongly-correlated electronic systems."


Juan Carlos Campuzano is University of Illinois at Chicago Distinguished Professor in the Department of Physics, and Distinguished Fellow at Argonne National Laboratory. He has a B.Sc. in Applied Mathematics and Physics (1973) and a Ph. D. in Physics (1978) from the University of Wisconsin-Milwaukee. He was a Post-doctoral Fellow and then Research Associate at the Donnan Laboratories, University of Liverpool, England (1978-1981), working on photoemission. He was a Research Associate at the Cavendish Laboratory, University of Cambridge (1981-1985), working on 2-dimensional phase transitions and critical phenomena and the development of photoelectron spectromicroscopy. In 1985 he joined the Department of Physics at the University of Illinois at Chicago, and also the Materials Science Division at Argonne National Laboratory in 1987. Research contributions include the observation of conformal invariance at the Ising critical point, the Luttinger scaling of the Fermi volume in high temperature superconductors, the observation of an extended singularity in their energy spectrum, momentum distribution sum rules in photoemission, development of atomic resolution holography, the spectral function interpretation of the photoemission lineshape, the pseudogap in the energy spectrum of underdoped superconductors, Fermi arcs and their scaling, the observation of spontaneous time reversal symmetry breaking in high temperature superconductors, etc. Juan Carlos Campuzano is a Fellow of the American Physical Society.