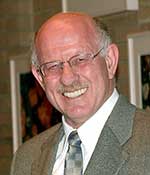 
"For leadership in the BABAR and Belle experiments, which established the violation of CP symmetry in B meson decay, and furthered our understanding of quark mixing and quantum chromodynamics."


Jonathan Dorfan received his B.Sc. in physics and applied mathematics from the University of Cape Town in 1969 and his Ph.D. in experimental particle physics from University of California, Irvine in 1976. He joined the Stanford Linear Accelerator (SLAC) in 1976 as a postdoc, became SLAC staff physicist in 1978, Associate Professor in 1984 and Professor in 1989.  Dorfan was spokesman for the MARK II Experiment at PEP, Co-Spokesman for the MARK II Experiment at SLC, Project Director for the B-Factory (PEP-II) at SLAC and Technical Coordinator for the closing few years of BABAR construction. In 1994, He became SLAC Associate Director and from 1999-2007 he served as SLAC’s third Director. In 2010, he moved to Japan as President-elect of the Okinawa Institute of Science and Technology Graduate University, where he has served as President/CEO since 2011. He is currently Co-Chair, Scientific Academic Advisory Committee at Weizmann Institute of Science. Dorfan is a Fellow of the American Association of Arts and Sciences and the American Physical Society. He holds honorary doctorates from the University of Cape Town, Technische Universität Dresden and University of Maryland University College.